Badges of Honour, or weapons of compromise.

Sewn badges are graphic codes embedded in a small patch of stitched cloth. They are signifiers of a grouping, a collective thought, an ethos and a decorative insignia all at the same time. They represent schools, universities, colleges, military units, clubs and orders, businesses, sports teams and merits or awards in groups such as Scouts, Guides, the Police and armed forces.

The craft of sewing is time consuming and the results are small, precise and lovingly made. Badges are ephemeral; they are decorative for decoration’s sake. Sewn using luscious silk thread in rich, pure colour and glittering precious gold thread they are ostentatious and jewel like. Due to the scale of the ‘canvas’ the designs are concise, precise and aesthetically appealing. The over-locked edge of the badge corrals and confines the space available for the message. Within this restricted space all information is given in coded shorthand and the stitching becomes the conveyer of meaning.

The badge is a space of uncertainty. Entangled within the threads are hidden messages expressed in clichédsymbols, mythological creatures, whimsical cartoons or fairy tale characters and script. The stitched threads represent a secret language that expresses heraldry, mission and attainments in codified form.

Unknowingly the eye reads a badge as a satisfactory form, an object of beauty; all information is simplified and carefully rendered in cloth and stitch. Those densely stitched edges not only define the parameters of the information contained, framing it, but they also form the demarcation line between one thing and the next, between the object and the subject. There is the art within the frame and there is something outside the frame. What is outside? The person. Who is that person?

Does the badge define the person or do they define the badge? What if it is just a fashion statement, a passing fad, a craze, or a found badge that has been applied to a jacket for aesthetics rather than meaning? Or perhaps even as an ironic or anarchical statement?

Sewn patches are similar to logos and business branding; they are assimilated, read, and absorbed by us from birth. They mark out the bearer’s age, affiliations, concerns, passions and even their job. They are often associated with certain times in our lives or with particular passions, like the badge on a school blazer or the emblem of a football team, but they can also run deeper. As insignia and markers of rank across the armed forces they represent nation, loyalty, conflict and loss. In this instance these seemingly insignificant scraps of cloth carrying words and images become tangible symbols of a nation’s psyche. Despite their size and decorative nature badges are emotively charged.

Sewn badges are just one of the many markers worn by members of a ‘club’ to identify themselves. Sewn badges work alongside ties, enamel badges and distinct colours and markings of clothing. You may be part of the club by default, by attending a particular school or working for an organisation, or by choice, such as following a particular team.

Generally we are attracted by the sense of belonging, of a shared knowledge and experience that wearing a particular badge gives us. We belong, we are included, we understand. But the club can be as much about exclusion. It can be about those that are on the outside, those that don’t belong or are refused entry.

Being a fan of a team is like a religion. There is the commonality of belief with facts and dogma to substantiate your faith, a role to play and a community to be part of. But then there are the opposing team’s fans, the opposing gods, the rivals. And then there are those that don’t follow sport, those that really don’t belong! The idea of being excluded, being segregated from, of not quite comprehending, of appearing ignorant makes one feel uncomfortable, angry even.

Incongruously, given their size and material value, sewn badges represent and give power to the wearer. It is similar to the idea behind uniforms. The history of the sewn patch is said to have started during the American Civil War. Identification is important for both sides in a conflict.

But badges are also a lot a bluff and bluster. Fake comradeship, fake significance and fake history hidden behind Latin script and gilt stitching. But in some instances this faux heroism has its raison d’être. Those who belong to that club, group or unit show by their badges a commonality of purpose. They are united by a specialism, training and a code of conduct. The badge shows collectivism but it can also represent containment and the cocooning of member wearers from reality, sanctioning behaviour that those outside the group may see as unsavoury, immoral or bizarre.

Any form of grouping or club is divisive. It represents social division, class division, intelligence division, and ethnic division. But which is worse, being pigeon holed or not having a grouping at all? Is it better to be as part of something and have comrades than to be on one’s own?

Social Segmentation is a method of population classification by income, job, class, education, location, interests, and leisure activities. It is a means of establishing trends, likes, dislikes and economics to predict up-take and participation in any given event. Crudely speaking it is a marketing tool, enabling a service provider to match products with customers. It is used within the art sector to target audiences and the arts provision within regions. The Segmentation toolkit help arts organisation to ask focused questions such as ‘How do we get these segments of the population interested, engaged, participating and spending their leisure time and money with us?’

For arts organisations the population is segmented into groups with titles such as ‘Dinner and a show’, ‘Time poor dreamers’ and ‘Urban arts eclectic’. If tax-payers’ money is spent on arts provision and maintaining an infrastructure of theatres, museums, galleries and venues there must be a match between the audience preference and the show, but surely only within reason. Good art is about experimentation, pushing boundaries and flouting convention, not giving people more of what they already know or like. What would be the point in that?

Local and national government, through the Arts Council, tasks arts organisations with attracting and pleasing a broad spectrum of audiences. Artists are expected to be cutting edge, innovative, provocative but within parameters, for the artist must also conform. They need to fit set criteria, meet objectives, and give value for money and where possible appeal to people that art does not usually reach. But isn’t it contradictory to think that you can be both inventive and also know the outcomes and the legacy of an artwork before it is even started?

In themselves the Segmentation groupings are like little clubs; a phrase like ‘Mid-life hobbyists’ or ‘Retired arts and craft’ could be part of the girl guides’ ‘I make it happen’ badge set. But in fact these segmentation groupings, as their little phrases suggest, are more serious, raising many difficult and knotty issues. Much information and research has been distilled down into these key indicators of social division; of class, gender, sexual orientation, economics, ethnicity and education. This makes for some uncomfortable thinking. The division of the have’s and have-nots, those that have taste or don’t, and a general dumbing down where ‘market forces’ mean that an audience is given what is deemed good for them or at their level. These are all patronising, divisive and controversial ideas.

And I have questions: Can art be made to attract and satisfy certain segments of a population? Is it good art if that is its driving force? Does Segmentation act as a directing force on the type of work that is made because it attracts funding? Should only the art that claims it will address one group over another be commissioned over another piece with no such presumption?  Generally I think not.

As an artist I have conflicting views on Segmentation and making my own art. I find it sociologically interesting and thought provoking in the context of thinking; what, and who is art for? And it is also a very robust and effective tool for arts organisations to use; to plan, commission and evaluate their ‘products’. But in relation to my own work there is no direct coloration. My work is about feeling somewhat out of kilter with the world around me, and my colourful interpretation of that befuddlement.

In 2013 I had velcro-backed embroidered Segmentations badges made. I have sewn a full set onto the lining of a suit jacket. On the upper left arm is a blank velcro patch to which I can attach a Segmentation badge of my choosing from the selection inside the jacket, or I can leave it blank. Whilst wearing this suit I perform a silent commentary to myself on the nature of art and audience. However as I have never been very comfortable with either the written or spoken word, I find discomfiture in choosing and displaying, even it this discrete manner, one of the Segmentations. Making a choice of affiliation, however secretly, gives me jitters of uncertainty and exposes me to possible undermining by more expert communicators.

I want my Segmentation Badges to be like the badges for American military secret units, programs and missions. These classified projects are known as ‘black’, they have ‘black budgets’ and are part of the ‘black world’. Their badges are black too like the Kasimir Malevich Black Square painting. They can’t be seen or known about until they are right in front of you and have decided to reveal themselves.

Being an artist is like any other occupation, you desire a certain degree of recognition and success. It is difficult making work in the void of no audience. So I find myself wanting to be both part of an artists club and have a fan club, an audience. I want to have a badge but I also don’t.

I COULD TELL YOU BUT THEN YOU WOULD HAVE TO BE DESTROYED BY ME.

Some Engagement: (Attend and may also participate)

Dinner and a show

A quiet pint with the match

Sofa, pub and the simple life

Relaxed on a budget 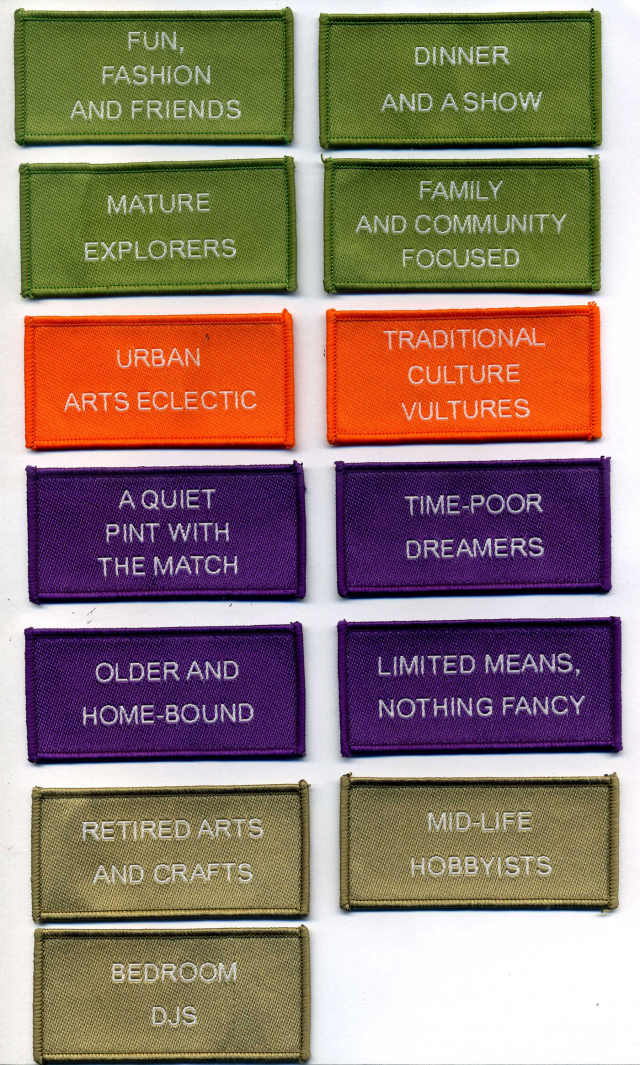